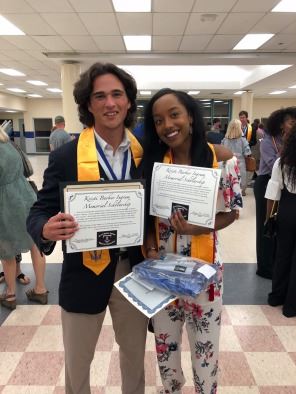 Alexandra (Ally) Nelson graduated in May 2018 with a 3.97 GPA and plans to attend Alabama A&M to study Fashion Merchandising.  Ally has a long list of academic accomplishments including National Society of High School Scholars, Spanish Honor Society, and a member of FBLA. After fighting her own battle with cancer, Ally began giving back through her own non-profit organization called The Butterfly Project 365.

Dawson Ingram graduated with a 4.14 GPA and plans to attend Troy University as a Pre-Med major and plans to become a Pediatrician.  Dawson is a member of the Beta Club and National Honor Society and has been a group leader with Big Time Ministries.  Dawson was described in a letter of recommendation as “always finding ways to reach out to others experiencing struggles and giving them a helping hand.”